I'd heard pellet grills were hard to take care of but I looked up the info and it only takes a few minutes if you've got the right tools.

I guess this is the kind of stuff that just continued to build up in a conventional gas grill but you do have to clean your pellet grill to keep it working properly.

I think it's funny that if you do too long and keep ignoring this alert, the message will change to "That grease trap won't clean itself".  I love the sarcasm.  They get points for that.

I don't know why this door is here but don't open it.  When you DO, it empties the entire pellet box.  Why would you need that?!!!

This thing would be a caked mess if not for the cool liners they sell.  I'm told some people just put foil on that big metal plate but that just seems like a mess waiting to happen and the liners aren't expensive

Bad fire box.  When you get this much ash built up, it's not heating up properly so it's time for some "routine maintenance".

Again, with the proper tools, it's a snap.  There are two screws in this plate and they are easy to take out and replace.

No wonder the firebox was angry.

With the right tools, all of the ash is gone in no time.

Their instructions are clear about NOT using these wire brush grill cleaners.  They grill is covered with some sort of ceramic coating that will be destroyed by a wire brush.

Everybody likes a clean fire box.

Don't take the grill into the kitchen to clean it.  You will take a skillet to the head when your wife sees you do that.  I floated mine in the wheelbarrow, added some dishwashing liquid and let it soak for a while.

I have sworn off of an kind of honey based barbecue sauce.  I may swear off of sauce entirely.  What a mess.  Most of these pellet grill companies recommend using rubs instead and I think I will stick with that.  They are really tasty.

These grease catchers are easy to swap out.  One guy said he uses a mason jar in that bucket because his dog wouldn't leave this alone and created a huge mess. 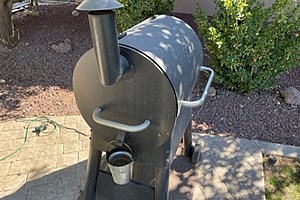 Almost ready with the new tray liner in place.

Don't forget to reset the alert or it will keep telling you to clean the grease trap.  I thought there was some sort of sensor.  There isn't.  It just reminds you now and then.

These probes go bad but you can buy a packet of 2 or 3 for just a few bucks.

I think the wire gets pinched or something that makes them go bad.

I thought getting the Wifi addition was stupid until one day I was out with some friend and it was time to reduce the temp on some pulled pork we were grilling.  With the app on my cell phone, it was a snap. It's handy to track what's going on.  I'm glad I listened to the guy at Home Depot.  BTW: My friend nicknamed my grill, "The Altar" because of all of the "burnt offerings" I had served them from my previous grill.  My friends are not nice people.  I hate them all.

Game time.  I don't use the probe until I've turned it over to grill side 2.

I like their shutdown mode.  That too is something you can do from the app on your cell phone.  You can't START the grill from your phone but you can shut it down.  I think  they could have made it so you could start the grill as well but they would have been blamed for fires so they made it just work for the Shutdown Cycle.

Clean up is a breeze.  Have fun with it and happy grilling y'all!!!

Categories: Articles
Comments
Leave A Comment
Cool Stuff to Do in Southern Utah Dec-Jan
Singer-Songwriter Christine McVie has died
Perfect for Utah. Turkey on the grill recipe.
Southern Utah is Counting on YOU on Black Friday and Cyber-Monday
Christmas Music Around the Clock on Star 98
Top 25 most common surnames in Utah. Where does your family name rank?
Do You Think It’s Tough Being Single In Utah?
Season’s Eatings: Here’s How You Can Win $500 to Blue Apron for the Holidays
Lottery Jackpot is now over $1.5 BILLION. I’m off to Beaver Dam